Fungus gnats are one of the most common houseplant pests you get when you have indoor plants.

The gnats species Mycetophilidae and Sciaridae feed on tiny bits of fungi and decaying matter that rest on any healthy soil.

You can discover fungus gnats quickly grow out of control, as the breeding cycle is concise. While minor infestations are usually not harmful, they can interfere with your serene indoor garden as the gnats are flying around.

Adult fungus gnats luckily don’t harm your plants or bite; however, larvae damage roots and stunt your plant growth when any infestation is left to its own devices.

In our guide, you can find the quick and simple methods that effectively deal with fungus gnats. By the end of the guide, you’ll have more understanding of how to get rid of gnats in plants. 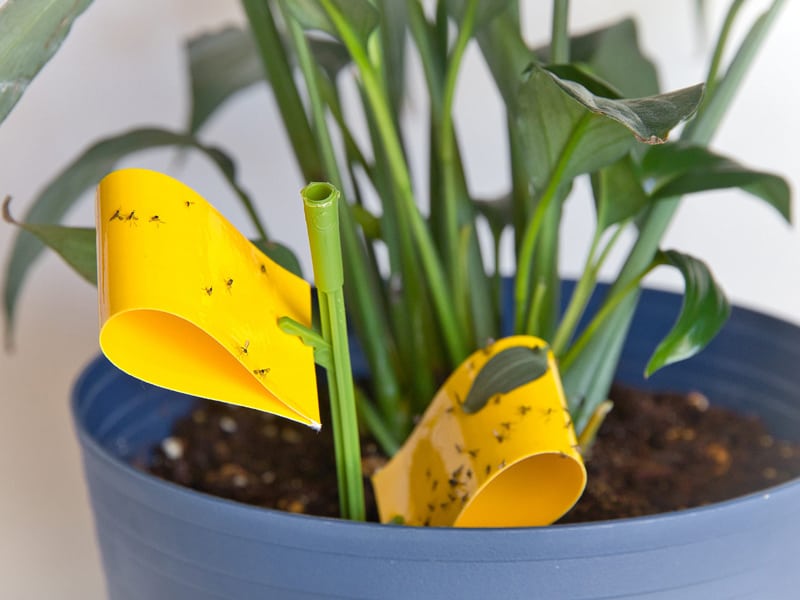 Growing garden plants from seed are rewarding, and you can grow species not found in garden centers. Fungus gnats and damping-off can get to the most seasoned gardeners when they affect growing seedlings. Before buying chemicals, you can use the following to kill a fungus gnat infestation. (Learn How to Get Rid of Fungus Gnats in Houseplants)

Fungus gnats differ from fruit flies as these hang out close to fruit, rotten food, while you’ll find fungus gnats in wet plant soil or around household drains. Fungus gnat adults will be around 1/8-inch long, and the flies have long legs and appear to be tiny mosquitoes.

Sand: Adults eggs in the top 1/4 inch of moist soil. Cover the top with 1/4–1/2 inch of sand. This drains fast and stops adults from laying eggs as they think the soil is dry.

A good trap for fungus gnats and fruit flies is filling small jars halfway with apple cider vinegar or a cheap beer. Add to this a drop or two of dish soap as it breaks the surface tension and means the gnats will stick. Replace the lids and poke small holes in the lids. Place around your plants, and as the gnats and flies go in, they drown.

Place some 1 x 1 by 1/4-inch pieces of potato. Place these alongside each other on the surface of your potting media, so they attract fungus gnat larvae. After a few hours, check underneath and dispose of as many fungus gnat larvae as possible. Change the potato every few days.

Another useful cure for fungus gnats is food-grade Diatomaceous Earth (DE), which is natural mineralized fossil dust. It is non-toxic, so it is safe for the environment and uses in your home. Make sure you have food grade, as any other variant isn’t so forgiving. Wear a mask to prevent the dust from irritating your throat.

If you mix into the top layer of infested soil or before you plant, add to the potting mix, fungus gnat larvae or the adults, which come into contact with it die. 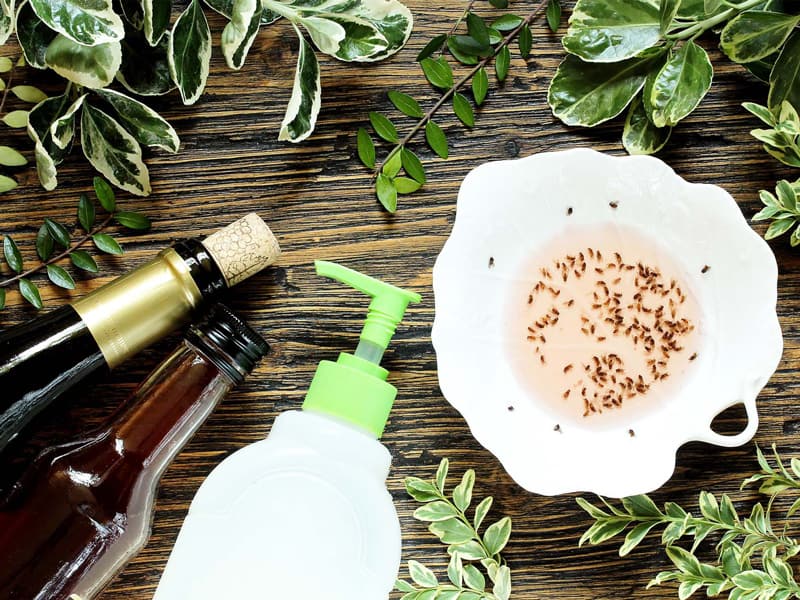 How Do You Get Rid of Gnats in Potting Soil?

If those pests just don’t quit, you can use a solution of water and soap in a spray bottle to spray into the top layer of soil (or pour it directly on top). You can also do this with an organic insecticidal soap or Neem oil mixture; these natural pesticides should be effective after a few treatments. (Find the Best Outdoor Potting Bench)

Cinnamon: Control Larvae and Damping Off

Cinnamon powder is a proven fungicide that has been shown to work well against damping off. Fungus gnats are controlled by killing the fungus that the larvae feed on.

To use, sprinkle cinnamon across the top of your potting media to form a layer, and repeat every few weeks. Cinnamon shouldn’t be used to control fungus gnats in worm bins because it destroys the worms.

Steinernema feltiae is a type of nematode that can smother the soil any time you water. Such worm-like creatures can penetrate the soil where larvae lurk and release a bacterium to destroy them.

Nematodes are effective, but they are costly and difficult to manage in small amounts. They are better used on a large infestation of several plants. Nematodes are safe to use in worm bins and destroy several soil-borne pests like fungus gnat larvae in the top of the soil. (Learn Does Potting Soil Go Bad)

Will Fungus Gnats Go Away on Their Own?

The infestation begins to spread as the adults lay their eggs and multiply. You can get rid of fungus gnats without having to destroy any of your plants, so don’t worry.

Allow the soil of infected plants to fully dry out if the infestation is fresh, as this will destroy the larvae.

So, if you ask, how do I get rid of gnats in my potted plants? Let the soil dry, and then the gnats will go.

How Do You Get Rid of Fungus Gnats in Houseplants?

Gnats are attracted to the top inches of soil when it is wet and moist. Young plants will be most affected when adults are laying their eggs in such organic matter.

The soil surface then has all the larvae eager to get down to the plant’s roots. Here you can find more ways of gnat control in your houseplants.

This should be the first measure taken when a fungus gnat problem arises. Let the top few inches of soil dry out.

Adult gnats find the soil unappealing so that they won’t lay eggs. Doing this should let you kill lots of eggs and larvae. Also, get rid of standing water as this doesn’t help the matter.

However, fungus gnats spend most of their life cycle as eggs and larvae. Sticky traps only help when they are mature and laying more eggs where the problems come from. However, use yellow sticky traps to fully break the cycle and prevent fungus gnats from increasing larvae numbers in the top of the soil. 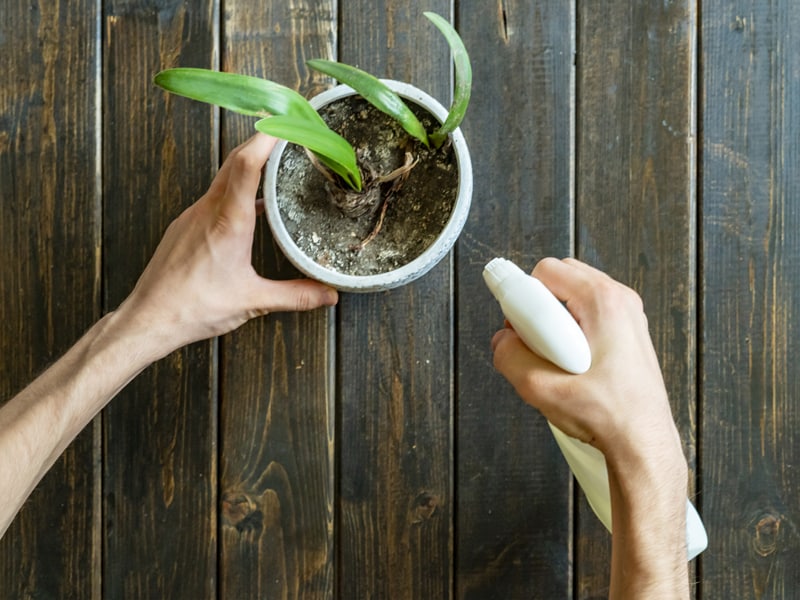 Allow the soil to dry around your house plants before application. You can then spray the surface until it saturates a couple of inches.

Or you can water the entire plant letting it soak all the soil. It may fizz, yet it breaks down into molecules of water and oxygen. It will quickly deal with and fungus gnat larvae or the adults that swoop to lay eggs. (Read Does Hydrogen Peroxide Bleach Clothes)

Bt-i works on fungus gnats where other methods don’t work. It is, however, more expensive to use in your plants and your worm bins.

As with hydrogen peroxide or Bt-i, neem oil can be applied to infected soil to kill fungus gnats. However, you do need to dilute rather than using the concentrated neem oil.

Just stick to the manufacturer’s instructions as these can differ by the supplier. Watering with diluted neem oil helps kill fungus gnats and repel them.

All the methods here are effective, and you can use more than one. It is better to avoid a rich organic potting medium or mix with soil from your garden. Before too long, you can have your gnat issues under control. 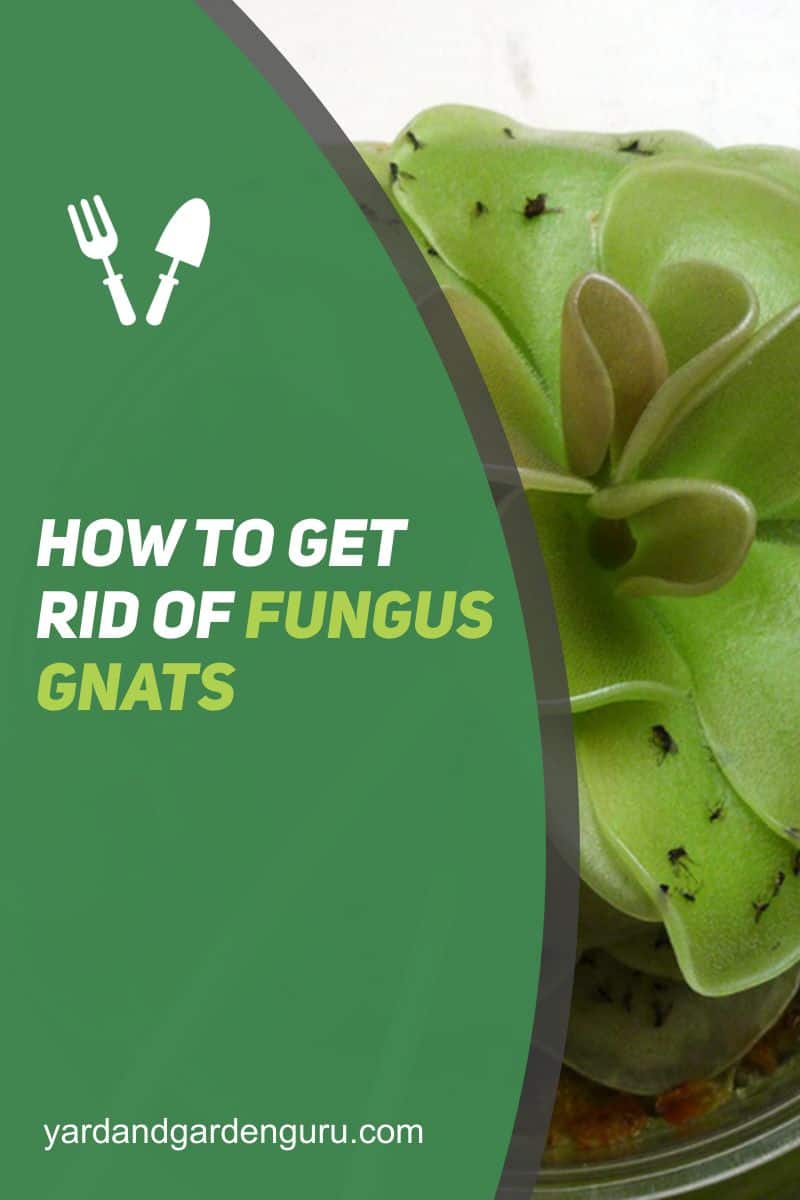